The last Flanders Foal Auction this year received a lot of attention from the professionals. International showjumping riders, stallion rearers and top-class stables went shopping on Thursday-night 23 September at Sentower Park and came home with special showjumping foals. Two went for 50,000 euro, the average price of the 37 sold foals was 21,270 euro of which ten were sold online.

Balou du Reventon and Chacco Blue
There was a fierce battle for the last foal of the evening, Bello Philyra VV Z, an impressive son of the number two in the Aachen Grand Prix, Balou du Reventon, out of the 1.60m Grand Prix mare Coriana van Klapscheut (Darco x Heartbreaker) who performed excellently under Eric Lamaze. The last bidders were the Holsteiner Studbook, attending with a powerful delegation, and Grand Prix rider Florian Meyer zu Hartum, who was on the phone with Paul Schockemöhle. Schockemöhle won for 50,000 euro.

The other 50,000 euro foal will stay in Belgium: Chack Blue (Chacco Blue x Mr.Blue), half-brother of the 1.60m Grand Prix stallion Scuderia 1918 Tobago Z. There is a good chance that we will hear a lot more of the ‘Flanders foals’ in future, considering the addresses they are going to. “It means a lot to us that professionals have confidence in our auction and foals and always return for more. We just had another good auction. Not as extreme as the one from August, but we do not want to get spoiled”, say laughing Luk Van Puymbroeck and Gerald Lenaerts. “We can look back at an excellent auction year.”

Four to 'Lewitz'
Paul Schockemöhle bought a total of four foals in Opglabbeek. Chagatine Z (Chacoon Blue x Acordplus) for example, for 22,000 euro. A royally developed filly out of the dam of the famous Catch Me If You Can. That seems a bargain compared to last year, when he scored the half-brother Come and Catch Me Z (Comme il Faut) for 68,000 euro at Flanders Foal Auction. Also going to Gestüt Lewitz is the colt Cointreau LA Z (Chaclot x Untouched) out of the half-sister to Hardrock Z for 24,000 euro and the filly Eternelle Axelhoeve (Emerald x Casall) from the family of Corrado I and Chellano Z for 18,000 euro.

Three fillies to Canada
A regular Canadian client, closely involved with breeding, had this time come over together with her parents and bought three interesting fillies on the spot. One of them was Tangerina van het Maaskantje Z (Tangelo van de Zuuthoeve x Colander) out of the half-sister to Olympic Champion Explosion W, ridden by Ben Maher, for 32,000 euro. For the same amount Chac Star van de Berghoeve Z (Chacco Blue x Rubens du Ri d’Asse) out of the half-sister to Glock’s London will move to France. Stable-mate Chac Blue van de Berghoeve Z (Chacco Blue x Diamant de Semilly) out of the famous Gatoucha van ’t Roosakker will go to a new stables in Slovakia for 40,000 euro.

Embryo auctions
The auction season of Flanders Foal Auction has not entirely finished. An embryo auction is planned for November. “Until we are back again with foals, we are hoping to stage three embryo auctions in attractive, foreign locations. A lot will happen still!” 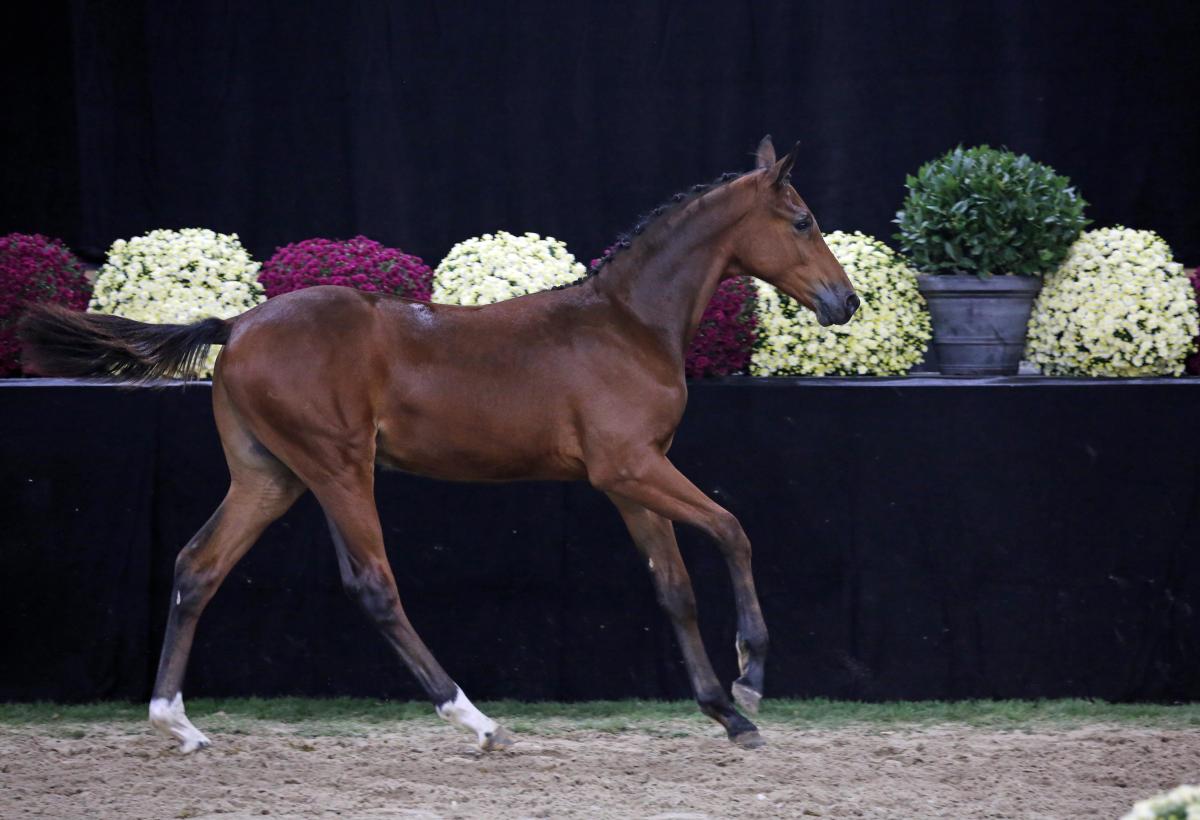