Auction organizer Luk Van Puymbroeck was treated to a top prize for his own Philyra LVP Z (Plot Blue x Bamako de Muze) during the Grand Final of the Flanders Foal Auction season last night. Muny Sunk Stables from the United States bought the filly for 42,000 euros, just like last year they stable also purchased the Opglabbeek price highlight. Overall, according to the trend of Flanders Foal Auction compared to 2016, the average price of the jumping foals in Opglabbeek increased to 16,666 euros.

"Gerald Lenaerts and I are really pleased. We had a top auction year ", Luk Van Puymbroeck points to a busy season. Following the first embryo auction in Sharjah (UAE), the foal and yearling auction in the British Bolesworth (average price 28,500 euros) and Bonheiden (average 16,250 euros), the 36 jumping foals at Sentower Park realized a turnover of 600,000 euros.

Professionals
"Opglabbeek may not be the easiest auction. People leave Zangersheide, where the World Breeding Championships for Young Showjumpers takes place, in a hurry to come here. But they're also all professionals. They are less sensitive to the auction atmosphere and spend less money. Tonight there were 500 to 600 professionals who have knowledge of a foal and who are very critical. That does not always make the business easier, but the great thing is that these foals will get into sports. They will get all the chances. You see that professionals are increasingly investing in good damlines from Belgium because they can hardly buy these horses at the four or five years age, " Luk Van Puymbroeck analyzes.

Van Puymbroeck purchased the dam of Philyra LVP Z pregnant from Plot Blue in France last winter. "The mare is only four years old. All her brothers and sisters compete at 1.40m to 1.60m level among who Coriana van Klapscheut with Eric Lamaze. " 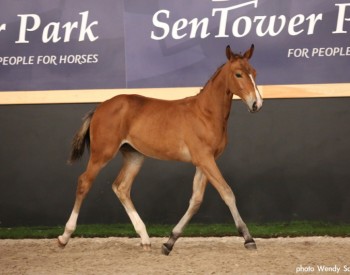 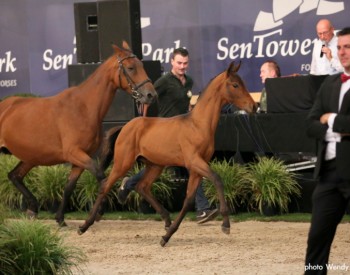 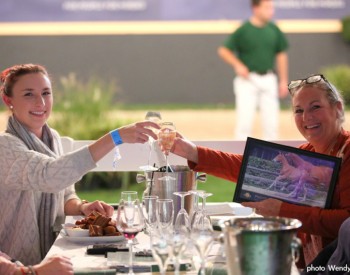