Only Grand Prix genes at Flanders Embryo Auction on 4 December

Only a few months to go before the first foals will be born that are going to be sold on Saturday-night 4 December. Flanders Embryo Auction will one more time this year offer an impressive collection of 24 unborn jumping foals.

“We will hold the auction during the international show at Sentower Park in Opglabbeek, Belgium, and we can promise that it will be a cozy and interesting evening, with room for about two hundred guests”, say Gerald Lenaerts and Luk Van Puymbroeck.

From the 1.60m Grand Prix mare Imagine de Muze, last weekend under James Wilson winner the 1.50m Grand Prix in Vilamoura, a grandchild by Perigueux will be sold. And how about a Comme il Faut out of the 1.60m Grand Prix mare Geena (1.55m), with behind her Babbe van ’t Roosakker (1.60m) and Usha van ’t Roosakker (1.50m)? Everyone knows the European championship sensation Levis de Muze; out of his half-sister Kirby de Muze (1.50m level under Marit Haar Skollerud) a Chacco Blue is on offer. Levis’ and Kirby’s dam Heroine de Muze (1.60m GP) was recently sold to Levis’ rider Loli Mytilineou.

Online & live bidding
If you can not attend in person, you can follow the embryo auction via www.clipmyhorse.tv or www.flandersfoalauction.be. Online bidding is also possible, of course. To book a table you can send a Whatsapp to 0032-476258647. In 2022, the first Flanders Embryo Auction will take place again on February 4 in Sharjah (UAE), close to Dubai. 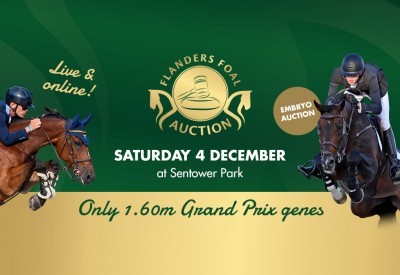 Only Grand Prix genes at Flanders Embryo Auction on 4 December