Flanders Foal Auction are readying themselves for their last foal auction of the year, on Saturday 17 September during the CSI4* show at Sentower Park in Opglabbeek. “We already have a top season behind us. Looking at the new foal collection, I believe that trend will hold”, says Gerald Lenaerts, together with Luk Van Puymbroeck organiser of the reputable auction.

They have all confidence. “The month of September may be a slightly more difficult month because of the vast number of foal auctions scheduled for that period, but we again managed to get hold of several very special foals. Standards had been high throughout the year and with every auction we had to stop looking for candidates sooner than before as we had reached the maximum number. Remarkable!”

“Several foals are out of younger mares that have not yet been active in the sport or have not yet been able to produce showjumping horses at higher level, but looking at the grandams, they are very impressive. There are 22 different grandams that produced one or more 1.60m Grand Prix horses! There is therefore an abundance of top sport in the genes”, Gerald Lenaerts explains.

So many highlights
The auction opens with the jet-black Waterloo EB (Diarado x Querlybet Hero) out of the Fragance de Chalus line, the full brother of Vedet EB auctioned last year for 60,000 euro. There are quality offspring by Kashmir Van Schuttershof, by Chacco Blue, who is nowadays used for the best mares, but also by Emerald en Balou du Reventon. There is a Conthargos out of the full sister of Elvis Ter Putte, a Cornet Obolensky son with Spruce Meadows winner Candy as grandam and a Heartbreaker with WEG champion Liscalgot as grandam. One of the Chacco Blue’s is a filly out of the full sister of Emerald. The number of highlights is too high to be mentioned all. 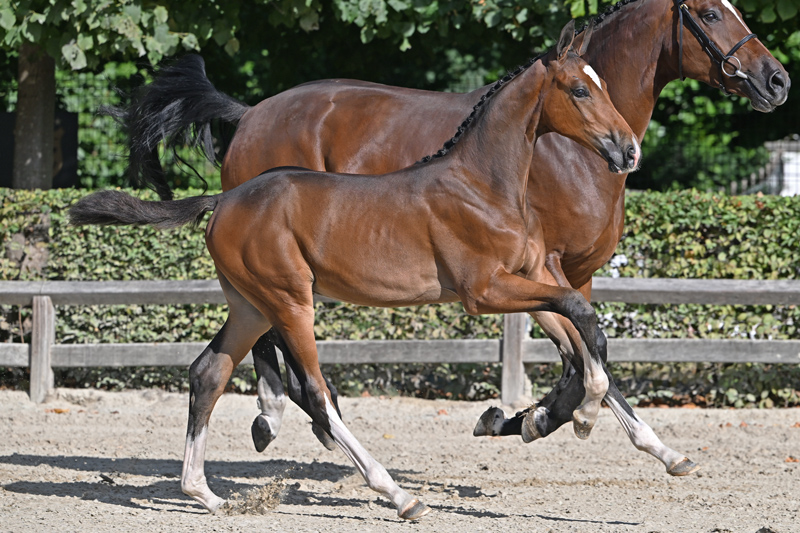