The latest foal auction from Flanders Foal Auction was recently completed, but the auction year has not yet ended. In one and a half week’s time the team will jump on a plane to Norway for an embryo auction on Friday-night 9 October.

The location is the same one as in January, the Arneberg Equestrian Center in Barkåke, where this time a CSI2* class will be jumped. Flanders Foal Auction will auction 22 unborn foals, for which the bidding can also be joined online and by telephone.

The collection can be seen online on www.flandersfoalauction.be and is unique in its kind. “First of all we are grateful that our auction is welcome again in Norway. The co-operation in January was very satisfactory and beautiful foals have since been born. In this way we can continue our philosophy of us visiting the clients. Scandinavia has many sport and breeding fans who want to make the difference”, says Luk Van Puymbroek.

Unique collection
Partner Gerald Lenaerts confirms this. “By now, the breeders know how to find us. We had soon selected this collection and it is a really remarkable one. For example, never before has any product been auctioned from the dam lines of Anka from Marcus Ehning and Alice from Simone Blum. The group of foals that will be born in 2021 is very divers.”

The Argentinus daughter Anka, who in 2003 won the World Cup Finals under Marcus Ehning and contributed to victories in Nations Cups, such as in La Baule and Calgary, is the grandam of an embryo by Eldorado van de Zeshoek x Cornado I. We even selected an Aganix du Seigneur x Lord bred out of the full sister of Marcus Ehning’s Noltes Kuchengirl, that won team medals in an EC and WC.

The Askari x Saccor is out of a quality 1.40m level showjumping mare, known as the half-sister of World Champion DSP Alice ridden by Simone Blum. The Kashmir Van Schuttershof x Norton d’Eole is a grandchild of the famous Butterfly Flip ridden by Malin Baryard. The Kannan x Andiamo is a half-brother to H&M All-In, under Peder Fredricson good for individual silver in the 2018 Olympics and individual gold at the EC in 2017.

A product out of the half-sister of the top-class Catch me if you can is the Emerald x Toulon. In August Flanders Foal Auction auctioned a great half-brother of Catch me if you can, who was snapped up by Paul Schockemöhle for 68,000 euro.

The impressive list is much longer than this, for also future talents are offered out of 1.60m Grand Prix mares such as Ciske van Overis and Teavanta II, bred from the Roosakker family and from lines such as that of Itot du Chateau, Fragance de Chalus and Pialotta. The team of Flanders Foal Auction is looking forward to the auction night. 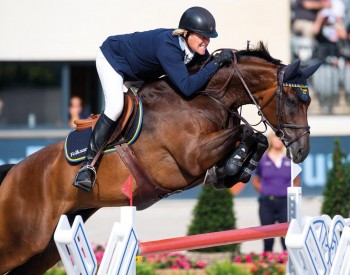