Flanders Foal Auction in May at Jumping Schröder Tubbergen

The internationally well-known Flanders Foal Auction is coming to the Netherlands. In addition to several succesful foal auctions in Belgium and Great Britain and embryo auctions in the USA, the Emirates, Norway and Ireland soon ten foals will be auctioned on the grounds of the BWG Stables. The auction will take place on Friday-night 15 May during Jumping Schröder Tubbergen, the international showjumping show of the Schröder brothers Wim, Ben and Gerco.

Magnificent foal booked
Foals were already auctioned at Jumping Schröder Tubbergen in the past two years, but with the co-operation of Flanders Foal Auction this year’s collection of showjumping foals promises to be exceptional. Luk Van Puymbroeck and Gerald Lenaerts from Flanders Foal Auction already have highly interesting pedigrees in mind. Today the first foal was booked already in Germany: a magnificent, one week old colt by Marcus Ehning’s top-class stallion Comme il Faut (by Cornet Obolensky) out of the dam of Catch Me If You Can, the former super star of Laura Klaphake which was sold in 2018 for many millions. One and a half week ago Flanders Foal Auction also auctioned an embryo by Chacco Blue out of the half-sister to Catch Me If You Can for 30,000 euro in Sharjah (UAE).

Real special foals
Wim Schröder is looking forward to the auction. “Flanders Foal Auction has a strong international orientation and knows precisely what the market wants. I am expecting real special foals with a lot of quality. We hope to buy a few ourselves again. To get your hands on better showjumping horses in the future, you will have to buy the horses as early as you can. It is no longer so easy to buy something at the showground. They are either already to expensive or no longer for sale. That is why I see increasing numbers of riders around me buying foals.”

Produce the best
“We have a good feeling about this”, says Gerald Lenaerts on behalf of Flanders Foal Auction about the new co-operation that was realized via foal selector Mark Oude Griep. “Jumping Schröder Tubbergen has a very good reputation, it is a beautiful and cozy show and the brothers have many good contacts themselves. That is why I believe that together we can make this a great thing. Because we offer only ten foals for sale, we can afford to produce the best. That will not be a problem. We will offer a few excellent foals from Belgium, but we also welcome foals from the side of the Schröders. They are living in top breeding country and we should certainly use that asset.”

Following the FFA formula, the foals will always descend from proven sires, on the dam’s side be closely related to Grand Prix showjumping horses and display correct and appealing conformations and a fine canter. Breeders can offer their foals by apping a movie and a Horsetelex link of the pedigree to Flanders Foal Auction. 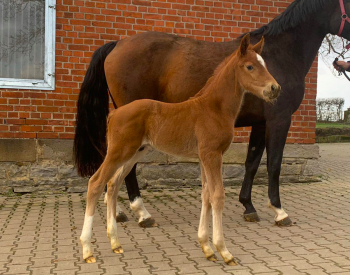