Flanders Foal Auction in Bonheiden also better than ever

With three jumping foals going for 30,000 euros or more and an average price of 16,285 euros, the auction record at Jumping Bonheiden has also been broken by the Flanders Foal Auction team. A new American customer purchased three foals by phone on Saturday, June 24th, among them auction highlight Rolex van 't Zorgvliet (Diamant de Semilly x For Joy van 't Zorgvliet) for 35,000 euros.

"Very satisfied", auction organizers Luk Van Puymbroeck and Gerald Lenaerts agreed. The turnover of the 28 auction foals was 456,000 euros." Last week in Bolesworth, we realized an average of 28.500 euros, which of course is extreme. I said in advance I would sign for half this average for Bonheide immediately. Well, we succeded with even more than half, "says Luk Van Puymbroeck.

Gerald Lenaerts did not expect the rising trend. "I hoped for it, but you can not assume that prices will increase. We have never had as many phone bids as this year. That made it a lot easier. There were many new customers who had heard of the Flanders Foal Auction by our embryo auction in Sharjah and the Bolesworth auction last week. That apparently creates trust. "

The Flanders Foal Auction started at 22.00 after delay in the jumping program, but the auction went smoothly with Dirk Zagers as auctioneer. The fact that Rolex van 't Zorgvliet would be the prize highlight was not a surprise as a grandson of the international 1.45m jumping mare Galouba van' t Zorgvliet (by Balou du Rouet), who is also a half-sister of three Grand Prix horses including Rahmannshof Baluga.

Gerald Lenaerts saw his own Uncle Bob van Overis Z (Untouchable x Ahorn), bred out of the grandam of 1.60m Grand Prix horse VDL Group Arera (rider Maikel van der Vleuter), sold for 32,000 euros to Monaco. Meanwhile Maurannen Smets is very excited at the VIP and introduces the buyer. "That's my peter. He has never bought a horse. I can ride him later. I'm so happy! I've stabled my horses here in Bonheiden and saw the catalogues lying here, but Uncle Bob really got me up when I saw him on the Facebook page of the auction. "

The foals were sold to Monaco, America, France, Great-Britain, Belgium, The Netherlands and Germany. The Belgian Stal Zevenhuizen even bought three, offspring of Plot Blue, Casallo Z and Canturano. Only two foals were sold for less then 10,000 euros.

The next Flanders Foal Auction will be organized on 21 September at Sentower Park in Opglabbeek during the week of the World Championships for young showjumping horses in Lanaken. "We have already selected very interesting foals. The quality standard is high again, "says Gerald Lenaerts. 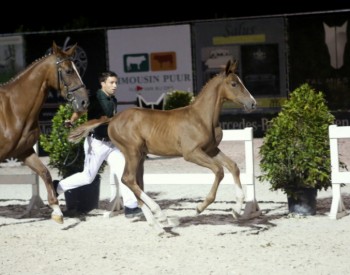 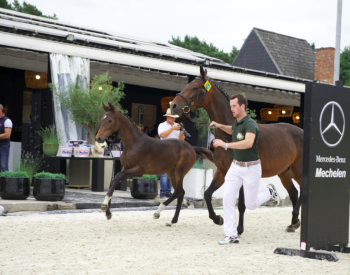 Flanders Foal Auction in Bonheiden also better than ever