The new auction collection of Flanders Foal Auction has an Olympic aura. From the 35 jumping foals, to be auctioned on Saturday 7 August, several are linked to the top-class horses now in Tokyo. “We were pleased to be offered many highlights again”, say Luk Van Puymbroeck and Gerald Lenaerts. “The collection is as impressive as that from July.” The results were amazing that time. The average price was no less than 25,233 euro.

The collection for the auction to be held during the CSI2* Opglabbeek at Sentower Park has Chacco Blue, Emerald and Comme il Faut as main suppliers with four offspring each. Conthargos, Kashmir Van Schuttershof, Tangelo van de Zuuthoeve and Balou du Reventon (Olympic reserve for Team USA) provide two each.

Security
“You should select what your clients wants to buy. They would like to have some security. That is only logical. When you invest in a foal, you would rather buy one by a proven sire. This time we offer foals from 21 different sires. It will be difficult to make a choice.”

The expectation is that fillies will be popular again. “Before the colts were the most expensive, in the last auction the fillies sold best. Such interesting breeding material gives you a good start and with today’s techniques you can breed more than one foal per year.”

This time there will be fillies from the lines of Usha van ’t Roosakker, Schuttershof, Itot du Chateau, Funky Fred and Larthago. There is also a Chacco Blue out of the full sister of Emerald. Another interesting one is the daughter of the super jumper Chaclot (Chacco Blue), reserve for Italy at the Olympics, ridden by Riccardo Pisani.

Of further interest are the colts from the damline of Cornet Obolensky, Panama du Seigneur and Emerald. And what to think of a Chacco Blue x Darco out of the full sister of Winningmood van de Arenberg?

Totilas look-a-like
The auction will set off with fireworks, the first lot being Escape van de Olmenhoeve (Diarado x Querlybet Hero). Gerald Lenaerts reveals: “On the video days I always score the foals with points, 20 being the maximum and I had never given anyone 20/20 until this one came into the ring. He looks very similar to Totilas. Black, four white feet. A superb showjumping foal out of a dam that already produced a good 1.60m Grand Prix horse. It promises to be a fine evening!”

The presentation of the foals is at 18.00 hours CET, the auction starts at 20.00 hours. Clipmyhorse.tv takes care of the live-streaming and there is again the opportunity of making bids online. 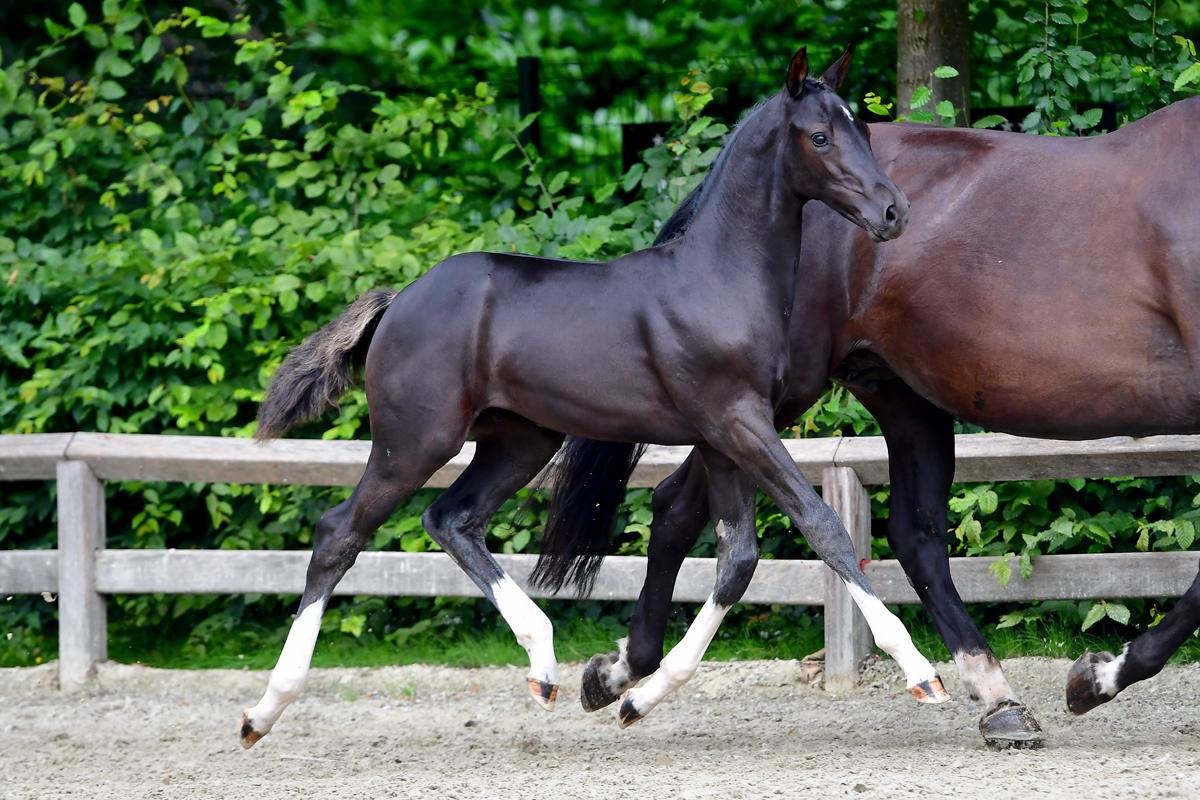