Flanders Foal Auction closes with an average of 20,000 euro

Considering that for some time now there has been a foal auction in the Netherlands or abroad almost every day, one would expect the enthusiasm to wane by the end of the season. But nothing is further from the truth, looking at the speed at which the collection was auctioned last night by Flanders Foal Auction. Of the 38 showjumping foals as many as 37 moved to new stables for an average price of 20,000 euro and a total turnover of 739,000 euro.

46,000 euro
Luk Van Puymbroek and Gerald Lenaerts did good business at the magnificent Travers Horse Facility, close to Equestrian Centre De Peelbergen in Kronenberg. Cergy LVP Z (Cornet Obolensky x Darco), grand-daughter of Centa de Muze, was sold online to new Canadian clients for 46,000 euro. “When you play off Clipmyhorse again, you see how fast the bidding went. Our auctioneer Louis De Cleene could hardly keep up. He did a great job. There was action in the auction from beginning to the end and he caught it all”, says Luk Van Puymbroeck. Blues Z (Bamako de Muze x Cornet Obolensky) from the same family went for 26,000 euro and for 38,000 euro Don Julio T40 Z (Diamant de Semilly x Cento), directly out of Centa de Muze, was knocked down.

Not yet tired of foals
“The prices for the sellers were real good. We managed to seel thirteen foals at the auction itself, the rest went online or by telephone. Almost all of them by foreign buyers”, says Luk Van Puymbroeck. “We were anxious about the market having tired of foals, but there were many old and a lot of new clients.” In total 48% of the auction foals were sold through online bidding, which is a growing trend.

Embryo auction
Although this was the last Flanders Foal Auction for this year, the team is not done yet. There will be an embryo auction in Norway on Friday 9 October. The location is the Arneberg Equestrian Center in Barkåker, where ‘Flanders’ also auctioned last January. This time the auction is held at the same time as an international showjumping weekend. “The collection will soon be available online. I must admit that we never had such a collection of embryos before. Various and wide-branched mares lines, each of them really excellent. We expect that this will also be a top-class auction!” The Norwegian organisation is already looking forward to it. Last night ‘Equestrian Events’ bought Larthago’s grandson Toledo Z (Tobago). 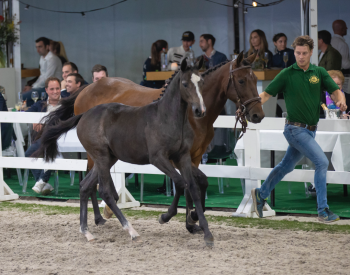