After two embryo auctions in the Arabian Emirates and Norway and two live foal auctions, Flanders Foal Auction will hold its ‘Grand finale’ on Saturday-night 12 September. In this last auction of this year 38 showjumping foals are auctioned.

Like for the previous, successful edition, Travers Horse Facility will be the auction location, situated close to Equestrian Centre De Peelbergen in Kronenberg, Limburg. “We were very warmly welcomed there last time and we had a splendid auction”, say Luk Van Puymbroeck and Gerald Lenaerts. Travers Horse Facility does not directly profile itself as an event location, but is a big fan of the local horse sport and therefore makes its accommodation once more available for the foal auction. Clipmyhorse.tv will be there again, as well, for the livestreaming for people staying at home.

Six by Chacco Blue
The collection of showjumping foals again makes your mouth water. Chacco Blue fans get six opportunities to claim one of his offspring. Emerald is represented by five foals and Conthargos by four. Baloubet du Rouet and Cornet Obolensky each have two foals in the race.

“We would have liked to offer less foals, but at the end we were offered such fantastic foals from breeders that normally would not sell or put their foals up for auction. We have, I believe, an unique collection again with foals out of great damlines.”

During this edition of Flanders Foal Auction you can, of course, again place your bids online or by telephone. Register via www.flandersfoalauction.be. 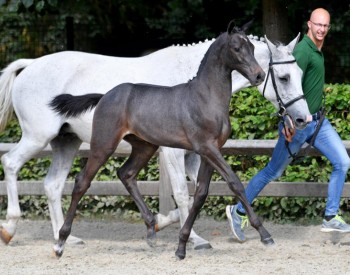