One thing became abundantly clear at Flanders Foal Auction: the market had never before been so much in the mood for buying special showjumping foals. After an eight months lockdown, the moment had finally arrived: the very first foal auction in all of Europe was celebrated on Saturday-night 3 July. With no less than three times a top price of 48,000 euro and and average of 25,233 euro for all thirty sold foals.

The online registrations for being able to join the bidding had streamed into the mailbox for days on end. The public that had come to Peelbergen Equestrian Centre in the Netherlands, where the auction took place for the first time, almost all stayed to the very end. At last an evening outing after that long wait and the mood was immediately festive.

Ireland and the Netherlands
The colourful eye-catcher Valou van het Audgoed (Emerald x Best Man Z) was immediately sold online to the USA for 22,000 euro. Soon after, the first 48,000 euro bid was made on the spot by an Irish showjumping rider for Chapeau PB Z (Chacco Blue x Baloubet du Rouet) out of the dam of Carrera VDL. The Netherlands also came on strong, which successfully bid the next two 48,000 euros, for Come and Get Me VK Z (Conthargos x Clinton), a half-sister of four 1.50-1.60m Grand Prix horses, and for Revolution W (Balou du Reventon x Denzel van ’t Meulenhof) out of the half-sister of Emerald.

7 August next auction
“We seem to repeat ourselves. We had never expected to reach this price level. Honestly, although we had a good feeling about this auction in view of the broad interest shown beforehand. What more could we want? Three auction highlights and very consistent prices for every breeder. There were no lesser foals, they were all of the same quality and the prices reflected this. In short, it was a great evening for everyone! Half of the collection was sold online, the rest either on the spot or by telephone. We are very motivated to continue, for we can offer a similarly classy collection in our next auction at Sentower Park on 7 August”, say Luk Van Puymbroeck and Gerald Lenaerts. 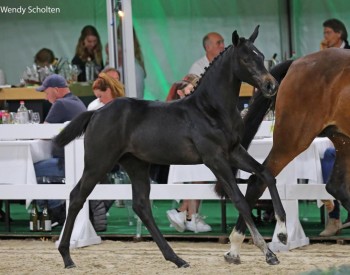 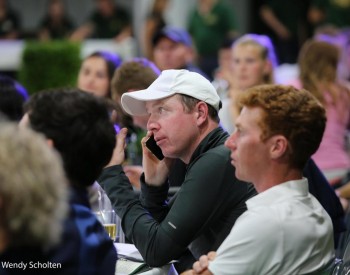 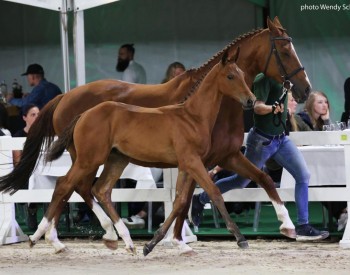 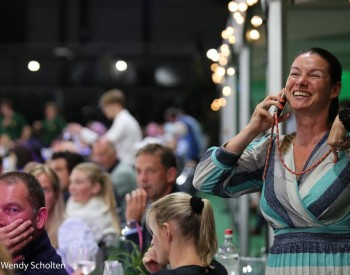 Sigrid Gielen buying a foal for a client 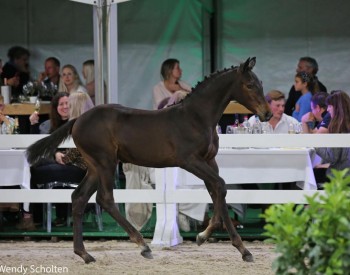 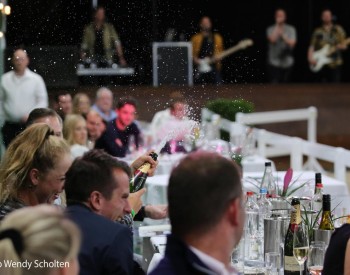