After Luk Van Puymbroeck and Gerald Lenaerts wrote history in February by auctioning embryos from exclusive jumping dam lines for the first time in the Emirates, the Belgians are now involved in the annual foal-, yearling and embryo auction on Friday 16th June at the international CSI4* show in Bolesworth, Great-Britain.

"The contact arose when Nina Barbour, manager of Estate Bolesworth and Show Director, purchased a few foals at our Flanders Foal Auction in Opglabbeek and invited us to come to her event. We happily did. We were very impressed by everything. A magnificent competition at the castle in a breathtaking setting and a great atmosphere. Afterwards, we were asked whether we would like to participate in the organization of the auction together with her team. We are coming to Bolesworth with the same team as early this year in Sharjah. "

The Bolesworth Elite Auction will take place in the main arena on Friday 16th June and will be broadcast by Clipmyhorse.tv. "Some horse owners from England and Ireland have introduced foals and yearlings, including Greg Broderick and Lisa Hales. Paul Hendriks will auction two horses and we complemented this with six foals and three embryos, all with great bloodlines. The breeders in Belgium were immediately excited. The offer of embryos and foals was huge. "

A total of nineteen foals, yearlings and embryos will be auctioned. From Big Star two offspring are selected, one out of the well-known 1.60m Grand Prix mare Tinka's Serenade who participated at the Olympic Games ridden by Billy Twomey, the European championships and World Equestrian Games and won over one million euros. Also very interesting are the embryos of Aganix du Seigneur out of Big Star's full sister and a Big Star out of the full sister of Arko III.

High expectations are also from the foal by Quasimodo van de Molendreef x Caretano Z out of the half-sister of 1.60m Grand Prix horse Hardrock Z and the Cornet Obolensky out of the 1.60m Grand Prix mare Caught in Auction (Champion du Lys), ridden by Helena Lundback. The Untouchable out of the dam of Hello Sanctos, one of the world's best jumping horses with Scott Brash, and the No Limit out of the full sister of Olympic stallion Arko III, are also highlights in this collection. The dam lines are soaked with international jumping genes.

Luk Van Puymbroeck and Gerald Lenaerts organize two auctions in Belgium this year: the Flanders Foal Auction in Bonheiden on June 24th  and in Opglabbeek on the 21st of September.

Check out the online catalog of Bolesworth 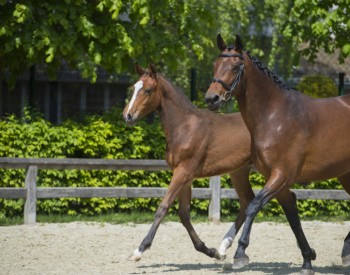