Article on Horseauctions.eu: 'How do you best prepare a foal for the auction?'

Horseauctions.eu ask experts in the field of horse auctions for their advice and experience, from which the buyers can profit. Gerald Lenaerts is one of them. Learn from him here:

His Van Overis breeding products are jumping world-wide at international to Grand Prix level, but  Gerald Lenaerts from Peer in Belgium is also known for Flanders Foal Auction, which he runs together with Luk Van Puymbroeck. We from Horse Auctions Europe are curious what his advice and tricks are to best prepare a foal for the auction, but also what to do after.

1. What does a good preparation for the auction look like for you?
‘From May onwards, the foals are out in the field day and night, weather permitting, for there is nothing better for a foal than spring gras. A few days before the video day we bring the foals in at night and they get some extra feed. For auctions that take place later in the year, the foals are fed extra for about two months before the auction. The mare feeding the foal should produce enough milk. Make sure that the dam is in good condition, that is the best start. The foals are also handled. When they are a week old, we put a headcollar on them, so that they can get used to that. We do that three times a week.

For the rest it is essential that the foals get plenty of outdoor movement and that they can play with their peers. If there’s real bad weather, they can stay indoors.”

2. When does the farrier come?
“The foals’ hooves are constantly watched. Four days before the auction, they are rasped. When the foals have correct feet, nothing should be done to them for the first two months.”

3. To present them as pretty as possible, foals are often clipped. When do you do that?
‘’The best thing is to clip the foal ten days before the video day, but this does depend on the weather, of course. In the summer they do well when they are clipped. They have less hair and don’t sweat.’’

4. How do you select your own foals?
‘’When the foals are a few weeks old, we begin the selection. We already look for foals that are suitable for an auction and which are not. There are only a few foals that are suitable for Flanders Foal Auction, because the standard is very high and there is a lot of offer. The quality of the foals is also constantly going up. When a foal is not suitable for the auction, I will rear it myself. I will probably sell it when it is a 3-yr-old, on the basis of free jumping. As long as that goes well, everything will be alright. He or she may not be very handsome, but should compensate this by jumping well. Then you can sell them.’’

6. What do you do for an optimum (video)presentation?
‘’I have the foal run free with the dam in the relevant ring once or twice before the video day. I act as if it is the video day, so the foal gets familiar with the environment. By that time the foal gets more cheeky and will run ahead of its dam. When a foal has never been in the ring, it will be a little stressed before the camera and that shows in their movements. That is a shame. The canter is extremely important for a showjumping foal and it is one of our most important selection criteria, besides type and pedigree.”

7. What happens to the foals after the auction until the date of delivery?
‘’We keep the foals in good condition until delivery. The last thing we want is for them to be in a bad condition. The foals should ideally be delivered in the same condition they had at the auction. In the past some breeders that offered their foals neglected this somewhat. After the auction the foal was sent into the field and was not looked after much until delivery. We have since become very strict ensuring that the foals are properly delivered and are in a good condition, so that the new owners receive the same foal as the one they saw at the Flanders Foal Auction. We have had to delay delivery on occasion, because the condition of the foal was not good enough. We wean the foal after the auction – if it is old enough – and that is always a small risk. I prefer to wean two foals at the same time, which makes it a little easier for them. Because they have to travel on their own, I put them alone in a stable the day before.”

8. Do you have special advice for people who want to buy a showjumping foal?
‘’I sure do. I insist that it is important to see the foal with your own eyes. Of course, online auctions make nice video recordings, but it is hard to assess the size and difficult to judge the conformation and feet. That is why I prefer live auctions. We do have clients that buy a foal online, but in that case they have watched the foal three times online: on the video of the video day, during the live presentation on the day of the auction and during the auction itself. If you had to buy a foal on the basis of a previously shot 20 second video with delayed action, I would find it very hard to decide if the foal is okay or not.’’ 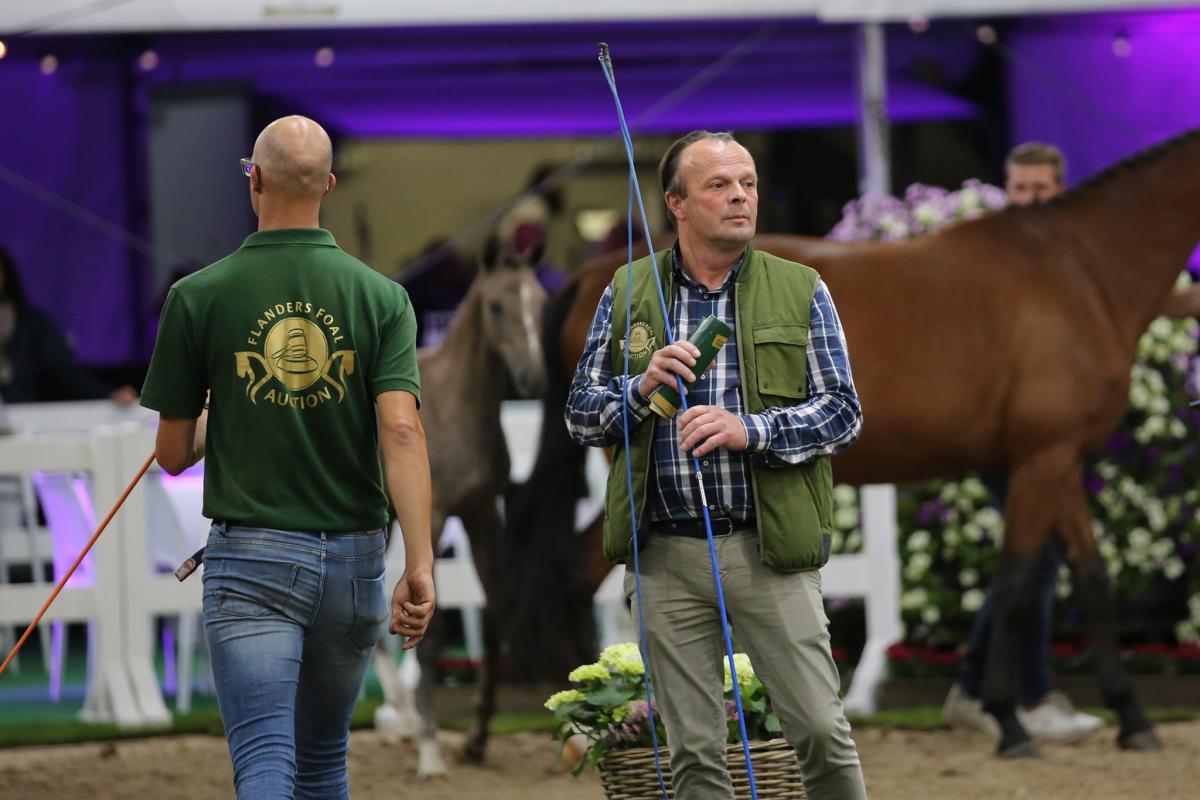