Sultan: 'You can not breed one nearly as good yourself'

For the 2nd time the Flanders Embryo Auction will be held at the Sharjah Equestrian and Racing Club in the Arab Emirates tomorrow. Sultan Mohammed Khalifa Al Yahya'ie, who is in charge of the equestrian facility, purshased a few embryos in the auction last year and this year he also has a few favorites in mind.

"The Flanders Embryo Auction is the first and only in the UAE and last year I think it was a great success. For both organizers and buyers. And I was one of the buyers and co-organizers, so I speak from my own experience ", he laughs.

Buying unborn foals that will grow up in Europe matches with the future vision of the Sultan. "We can buy and import semen from the best stallions, but then we do not have the best mares from the best damlines.  And the mare is the most important! In the auction you can buy embryos from championship mares, mares who have jumped at 1.60m level themselves. Like the Casall out of Valentina van 't Heike ridden by Jos Lansink. You can not breed anything nearly as good yourself? "

The breeding and rearing of showjumping horses has not been successful in the United Arab Emirates because of the heat and the lack of grass. "Alternative is to send a mare to Europe to be covered there, but that is very expensive. The Sharjah Equine Horse Hospital, our clinic, has recently received the recognition to export frozen embryos. This makes us the first in the country where people can bring their mares to cover, after which we facilitate the rest of the process including arranging the surrogate mare in Europe. I did not breed anymore, but this summer I’m going to try this with an injured Grand Prix mare that I have. "

At the table in the entrance hall of the equestrian facility in Sharjah where all the information of the twenty embryos can be found, the collection is being looked at with interest. "I spoke to a junior rider who looked at an embryo by Cornet Obolenky. He really would like to have a Cornet Obolensky, but not from his own mare he told me. "No, this mare is much better," he pointed to the catalog. That mindset, I like that. I also prefer buying an embryo from a top mare, then the chance of success is greater than breeding with one of my own. "

There was unfortunate bad luck for Sultan Mohammed Khalifa Al Yahya'ie last year, because the first foal from last year's embryo auction was not viable. "But that was handled without problems. The insurance that you can take out after the auction, paid back the purchase price immediately. The other foal I saw last summer at the stables of Luk Van Puymbroeck. That one looked very good. The conditions are very good there and he takes good care of the foals. I hope the auction will be as successful as last year. 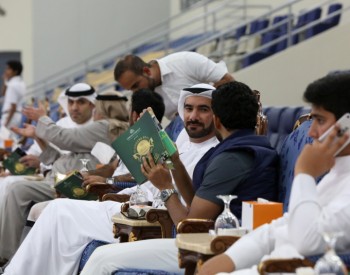 Sultan: 'You can not breed one nearly as good yourself'