Jos Lansink: 'Normally I do not sell anything from Valentina'

Conflict for Jos Lansink. Actually he doesn’t want to sell, on the other hand he is positively nervous for tomorrow. Luk Van Puymbroeck and Gerald Lenaerts of the Flanders Embryo Auction, which takes place in Sharjah on Friday 9 February for the 2nd time, have an embryo from Casall out of Valentina van 't Heike ridden by Jos Lansink.

"Normally I do not sell anything from Valentina, but they kept insisting. In the end I said yes because I still have two embryos from Valentina, " says Jos Lansink, who also participates in the international competition at the Sharjah Equestrian and Racing Club.

Valentina van 't Heike (Nabab de Reve x Lys de Darmen), bred by Karel Boonen, is a very valuable mare for Lansink in every way. "Second in the Global Champions Tour final, she jumped at the London Olympic Games and won a medal at the World Equestrian Games. In addition, she has already proven herself as a broodmare through Epleasure van 't Heike and Boomer van' t Heike. They won a Grand Prix on the same day, Epleasure in Paris and Boomer in Hengelo. How many Grand Prix mares breed that well?"

The combination with Casall, who has won almost everything a showjumping horse can win including the overall Global Champions Tour, makes the unborn foal extra interesting. "I expect a few more Cumano's out of Valentina and I have offspring sired by Chacco Blue, For Pleasure, Aganix du Seigneur and King Julio, a young son of King Kolibri. This year I’ll use For Pleasure, Aganix and even Carthago Z. Cumano and Carthago through the icsi method and for that Valentina is in Italy because they have many successes with this expensive technique. "

Jos Lansink will follow the embryo auction tomorrow with interest. "In fact, it is just selling hope. It is a long way before you have an international showjumping horse, with an embryo you have to wait even longer. On the other hand, from such a proven damline, it is worth the wait. Normally offspring from a mare like Valentina is not for sale. When the foal was born, I would have kept it and later given him or her every opportunity to develop optimally as a sport horse. You just believe in that. It is hardly possible that the offspring is not good ", says Jos Lansink.

Meanwhile, Jos Lansink has been in the Arab Emirates for a month with seven horses. "I am here together with Pieter Clemens and our groom, who was fourth in the CSI2 * Grand Prix last week. I’ve been here before, but I had never ridden here. I have to say that I am impressed by the level in this country and certainly by the organization of the competitions. If you go to Wellington or Vilamoura, you always ride in the same ring with the same fences. Here they constantly have other European course builders, other arenas and other fences. The level is now comparable to us in Europe. You should not think that you get some ribbons very easily here. " 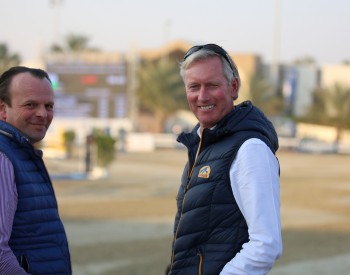 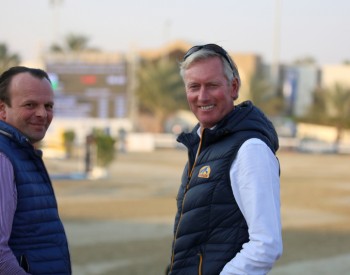