The first embryo auction of Flanders Foal Auction in Dublin set a new record with an average price of 20,000 euro. Of the twenty showjumping foals still to be born out of excellent dam lines nineteen were sold on Friday night 9 August. Irish investors grabbed their chance and bought nine of them in the pleasant lobby of the luxury InterContinental Hotel, around the corner from the Dublin Horse Show.

After three embryo auctions in Sharjah (UAE) and one in Ocala (USA) the auction team from Luk Van Puymbroek and Gerald Lenaerts travelled to Ireland this weekend. In view of the new rule that sport horses must have been born in Ireland in order to qualify for the popular finals for young horses in Dublin, the idea was born to auction embryo’s in Ireland itself. Ronan Rothwell from Boleybawn Horse Farm supported the initiative and saw how his countrymen warmly greeted the embryo auction.

Chacco Blue’s hot
With a few hundred people in attendance in the lobby and side-room, numerous online bidders from all over the world and several bids made by telephone, the prices of the first embyro’s immediately went up to 20,000 euro and more. Like the week before at the foal auction in Beervelde, the Chacco Blue’s were most popular. There was fierce bidding among the Irish for the most expensive one of 40,000 euro: Chacco Blue out of Hiamant van ’t Roosakker (Diamant de Semilly x Darco), closely related to numerous 1.60m Grand Prix showjumping horses. The Chacco Blue x Bamako de Muze out of the line of Vigo d’Arsouilles went for 20,000 euro, the Chacco Blue x Vigo d’Arsouilles out of the half-sister of Glock’s London will move for 34,000 euro to the Old Lodge Stud from Prince Torki, and the Chacco Blue x Elvis ter Putte, grandson of the 1.60m Grand Prix mare Candy ridden by Pieter de Vos, was bought for 25,000 euro.

A Dutchman had been coveting the Chacco Blue’s already for two weeks and eventually added the interestingly bred Cumano out of the full sister of the Olympic showjumping mare Valentina van ’t Heike to his stock for 24,000 euro. In Beervelde a Chacco Blue foal out of the same dam was sold for 64,000 euro to go to France. Also this Friday night the French investors took their chances via online bidding: two Emeralds for 18,000 and 19,000 euro and a Tobago for 18,000euro.

Darragh Kenny
After the auction Luk Van Puymbroeck and Gerald Lenaerts were more than pleased with the results. “You know what we liked best? That we managed to sell all but one of the embryo’s! And that for realistic prices. It was great, the location, the whole package of bidding by telephone, online and on the spot. Even some Irish showjumping riders were interested. Darragh Kenny bought the Balou du Reventon out of the Grand Prix mare Coronada for 20,000 euro. He is riding Balou himself. It was also good to see bidders, that were interested in last week’s foals but felt they were too expensive, now belong to the buyers”, they say.

“We also liked the fact that the majority of the embryo’s went to Ireland. Ireland is possibly the best country to have horses trained for an international career. The Irish are real horsemen, you can trust them to train a youngster correctly. We will certainly hear more from these embryo’s in the future.”

High class embryo’s
Also Ronan Rothwell could not have wished for a better start of the embryo auction. “The Irish are more sceptical than anyone else, wondering whether the embryo’s were sold or not, but we have all been able to see here that there was an enormous amount of interest. I am delighted that nine of these high class embryo’s will be born in Ireland. As founder and organizer of the Irish Breeders Classic, a 50,000 euro competition for 5- and 6-yr-old showjumping horses with the finals on 1 September, I hope to see them again at these shows. And I would like to thank the Flanders Foal Auction team for this pleasant co-operation. They are allround professionals.” 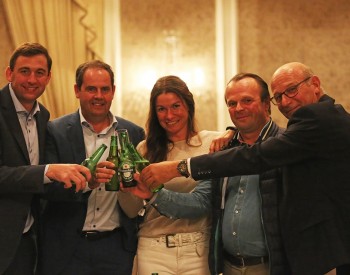