Although the last Flanders Foal Auction set a new record of more than 25,000 euro per foal, on Saturday-night  7 August last month’s prices faded into the background. At Sentower Park in Belgium hands were raised right from the start and at home the online auction button was pressed several hundred times. The result was an average price of 36,400 euro and a unique price of 130,000 euro for the full brother of H&M All-in, who had just won team gold and his second silver medal at the Olympic Games in Tokyo.

Medal winners
As far as that was concerned, everything slotted together. H&M All-in jumped himself into the limelight, Quel Homme de Hus won team bronze for Belgium. His half-brother Quel Casall (Casall x Candillo) was sold for 40,000 euro and will stay in Belgium. He was one of the twelve auction foals that were knocked down for 40,000 euro or more.

There was a spectacular start with 60,000 euro for ‘Totilas-look-a-like’ Vedett EB (Diarado x Querlybet Hero) out of the Fragance De Chalus line. Chacco’s Idol (Chacco Blue x Darco) out of the full sister of Winningmood went for 60,000 euro to Sweden. For 68,000 euro Charlene van het Oosthof Z (Chacco Blue x Diamant de Semilly) will soon reinforce the studfarm of the Norwegian Flanders agent Ann-Christin Rihm. She looked amazed at her mother who suprised her by bidding till the very end.

130,000 euro
The greatest sensation was caused by Kashman van de Berghoeve Z (Kashmir Van Schuttershof x Andiamo),the full brother of Peder Fredricson’s superstar H&M All-in. The public gave a real ovation and the mobile phones were taken out to record the spectacle. Auctioneer Louis De Cleene managed to drive up the price in no time, with good show feeling, to 100,000 euro and knocked down at 130,000 euro for a client on the spot. Germany has gained another talent.

Breeder Paul van den Bosch, unruffled as always, enjoyed the auction. “It is a coincidence that this happens at the same time as the Olympics. It completed the whole picture. Really quite great. I am grateful to Xavier Marie from Haras de Hus that he let me buy the dam two years ago”, he says.

Remarkable colour
Colour sells! Tikktakk LN Z (Tangelo van de Zuuthoeve x Balou du Rouet), a black horse with a lot of white markings, will go to Poland for 50,000 euro. This one also has a good damline, because the great-grandam is the European Championships mare Walnut de Muze, ridden by Harrie Smolders. Cara Blanca Z (Carambole x Darco), half-sister to two 1.60m Grand Prix horses, was remarkable for her white face and stay in Belgium. for 48,000 euro. The auction concluded with 45,000 euro for the beautiful Cinderella Zoetendaele Z (Comme il Faut x Balou du Rouet), who will stay in Belgium as well. In total, a quarter of the foals were sold online.

The next and last Flanders Foal Auction for this year will take place on 23 September at Sentower Park. 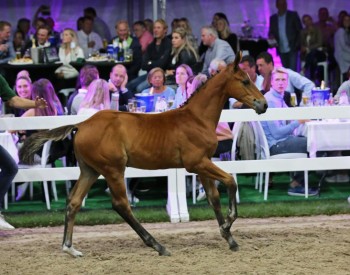 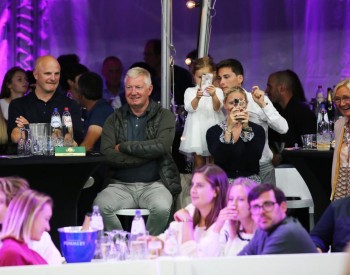