Online auctions have become gigantically popular ever since the Corona virus is strangling the world and only few foal auctions are held live. Flanders Foal Auction, however, sticks to its original design: auction at location with a limited number of guests and the possibility to join the bidding by telephone or online. On Saturday-night 8 August in Beervelde, Belgium, there will be another foal auction after the recent success of the average price per foal of 25,792 euro at Sentower Park.

Lot of information
“Let us say first of all that we do not expect to fetch such high prices again. But we do know that it will be a fine, enjoyable evening. We are looking forward to show the foals at Flanders Horse Event. Our power, we believe, lies in the fact that we can show the foals three times and that provides a lot of information to the buyers, also those staying at home. You can find the video online, the foal presentation via Clipmyhorse.tv and the auction itself, which is also broadcast live. When you only have one video from an auction website, it can be really hard to assess a foal”, says Gerald Lenaerts and Luk Van Puymbroeck.

Thirty foals
A total of thirty showjumping foals were selected, as usual closely related to well-known international showjumping horses and descending from proven sires. “But it is not just the papers that matter, of course. The foals must be really appealing and have a good canter. Those are focal points in our selection.”

Half-bro Catch me if you can
The auction collection has a lot of highlights, such as the half-brother to Catch me if you can, who was very successful under Laura Klaphake at 5* level. The handsome chestnut colt Come and Catch Me Z (Comme il Faut x Acordplus) is out of the same dam. The filly Ciara Storm EH Z (Cornet Obolensky x Darco) out of the 1.50m level showjumping mare Carrera de Muze, with before that the 5* GP mare Exquis Walnut de Muze, will also be very popular.

Chacco Blue
For Chacco Blue fans three splendid foals were selected, such as Chado Blue del Fiorello Z (Chacco Blue x Diarado) who is a great-grandson of the famous World Cup mare Qerly Chin. Three foals by Tobago Z will appear in the ring, as well as two offspring from Quabri de L’Isle. The presentation is planned at 18.30 hours, the auction will start at 20.00 hours local time. 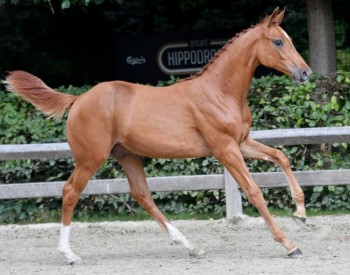 Come and Catch Me Z (Comme il Faut x Acordplus), half-brother to Catch me if you can