'Flanders Selection process has done the work for me'

The last two foals in the Flanders Foal Auction Bonheiden on June 22 came in British hands. New owner of Vega van de Berghoeve Z (Vigo d'Arsouilles) and Jiho un Prince (Diamant de Semilly) is Hempleman Equestrian in West Sussex. Time to ask some more about this stable.
"I was aware of Flanders Foal Auction as I follow the Van Overis horses and Gerald Lenearts' beeding programme, then based on the quality of the foals selected for past auctions thought maybe this is the way forward. Working full time in London time is limited to source quality horses", Kerry Dodimead tells.
"We try and breed a few each year from our mares and buy a few quality youngsters from Europe each year so we have a strong pipeline of horses coming through each age group."
"Each year we seem to be raising the bar with what we buy and are really excited with these two purchases. We have been keen to aquire a prospect with Sophie du Chateau in the Damline for some time, to come across a Diamant Cross was an added bonus."
"My rider Alex Hempleman and I looked through the catalogue and he really liked Jiho un Prince and he met my bloodline criteria. We will more than likely keep him in Europe to be raised potentially as a Stallion Prospect before starting his education in the UK."
"Vega van de Berghoeve caught my eye initially as she is just stunningly beautiful in type. I tend to try and buy fillies as we can then breed from them in time, could you ask for a better Grandam than Pialotta? I just won’t consider at a horse without a strong damline, the legwork of finding such prospect has been taken away as Flanders Selection process has done the work for me."
"Both horses will be produced by Alex Hempleman who is renowned for his talent producing young showjumpers with International Jumping Careers being the long term objective."
Jiho un Prince Vega vd Berghoeve Z 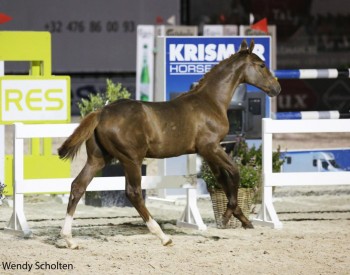 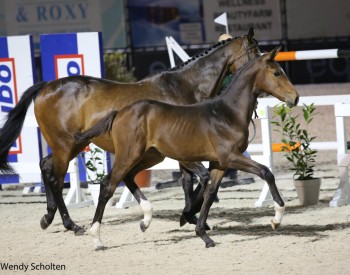