In a year when the experts predict that auction prices for foals will probably stagnate, Flanders Foal Auction keeps breaking records. At the very first edition at the magnificent CSI3* show Flanders Horse Event the already impressively high prices hit the roof. The 27 foals in Beervelde went for a total of 650,000 euro, that means for an average price of 24,074 euro. Henning Pretorius from the South African Capital Stud invested as much as 73,000 euro in Todos de Regor (by Chacco Blue) and he bought Jaures de Hus (by Baloubet du Rouet) for 50,000 euroto boost his breeding programme.

Flanders Foal Auction received plenty of attention from the vast crowd in attendance and the packed VIP boxes and proceedings were closely followed right up to midnight. There was enthusiastic bidding on the spot, as well, and so of the 27 foals twelve will stay in Belgium. Not a single breeder returned home with an unsold foal.

Chacco Blue
It did not come as a surprise that the Chacco Blue foals were very popular. Chacco Blue is the best showjumping horse producer in the world, although he suddenly died a few years ago and his frozen sperm is very hard to come by. Added to this, the foals come out of top-class sport mare lines, so naturally investors world-wide were alerted.

No-one, however, had expected Todos de Regor, bred out of the Belgian top-class mare Centa de Muze (by Cento), to be knocked down for 73,000 euro. Also the prices paid for Camiel Tachor Z (64,000euro), bred out of the full sister of the Olympic mare Valentina van ’t Heike, and Citation Darley Z (34,000 euro) out of the daughter of top-class mare Ta Belle van Sombeke were sensational. Camiel Tachor Z will move to France, but his half-brother will stay in Belgium. Jaures de Hus (Baloubet du Rouet x Wandor van de Mispelaer), which, like the most expensive foal, goes to South Africa, is out of a 1.40m level placed daughter of Ben Maher’s former super mare Cella. Eleven foals went for 20,000 euro and more.

Overwhelmed
“We feel overwelmed by this success. True enough, the Chacco Blue’s were already hot items before the auction even started. We had to make a lot of phonecalls to many people during the auction, but that these kind of prices were reached was totally unexpected. We are grateful for having been given the chance by show organiser Patrick Gansbeke to hold this auction at the finest show of Belgium. We also want to thank our clients for the confidence shown in us and, of course, the breeders who made their best breeding products available for this auction collection. This was an exceptionally fine event”, says Luk Van Puymbroeck and Gerald Lenaerts.

International clientele
Although the majority was sold to Belgian clients, such as Tiebreak Devaux (by Bamako de Muze) for 32,000 euro and Viana Z (by Verdi) for 30,000 euro, the remaining foals will travel to faraway countries. The Americans paid 35,000 euro for Tarzan of Love (Comme il Faut x Kannan) out of the line of Narcotique de Muze. The Danish Hallundback Stables added Kryptonite van Schuttershof (by Kashmir Van Schuttershof) for 24,000 euro) and Latina Z (by Luigi d’Eclips) for 18,000 euro to their stables. Other foals left for Great Britain, Italy, Switzerland, the Netherlands and Poland. Also the Portuguese showjumping rider Rodrigo Almeida was tempted to buy and picked out Cairo van ’t Goedleven (by Casall).

Embryo auction Dublin
There is not time to rest on any laurels, because the team of Flanders Foal Auction will move to Dublin next week. For the first time there, on the Friday night in the InterContinental Hotel, an embryo auction will be held during the Royal Dublin Horse Show. And again the collection comprises staggering pedigrees. 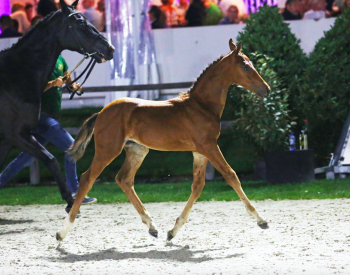 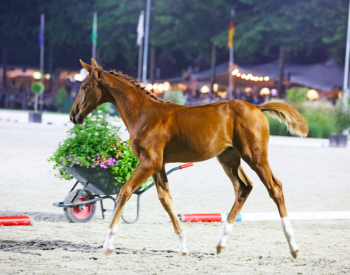