What can you expect from the very first live foal auction after the Corona crisis? “Lower prices”, predicted Gerald Lenaerts and Luk Van Puymbroeck, but they were so wrong! On the Saturday-night, at Sentower Park in Opglabbeek, there was a top auction in which 24 of the 25 showjumping foals were sold. The average price of 25,792 euro even broke the record of the 24,000 euro average in Beervelde in 2019.

It was a rather bumby road toward the auction evening because of the Corona virus. During the crisis no date could be fixed, it was uncertain that the auction could happen at all and there was a last-minute change of location. But Gerald Lenaerts and Luk Van Puymbroeck still stuck to the plan: “We are not going to sell online, like everybody else. We wanted a live auction with live streaming, to create a fine atmosphere and transmit that via the live streaming to the people at home.”

619.000 euro
The party atmosphere developed immediately at Sentower Park. For most of the two hundred guests it was their first evening out and they bid with great enthusiasm. Even so, only four foals were sold there and then, seven were sold by telephone and thirteen via the online bidding system. The total sales price amounted to 619,000 euro.

This time the fillies were most popular. Ur My Girl EH (Emerald x Kannan), bred out of the 1.60m level Grand Prix mare Kismet, formerly ridden by Meredith Michaels-Beerbaum, was the auction topper, going for 58,000 euro. “She goes to our loyal customer Greg Broderick from Ireland.” The winning (online) bid of 38.000 euro for Chica Van Schuttershof (Catoki x Kashmir Van Schuttershof) came from Switzerland.

Speechless
“This is really incredible, we are speechless. It turned out a good decision to go live and take the risk. The ambience at the auction was high and this probably caught on. You see plenty of autions that make a show of the prices, but here it was the clients who did so. I recently remarked in the Belgian media that we would be very happy if we reached an average price of between 10 and 15 thousand. But this has far exceeded our expectations”, says Luk Van Puymbroeck.

In the meantime the collection of showjumping foals for the next Flanders Foal Auction on August 8 in Beervelde has been selected. Details will be published online in one and a half week’s time. 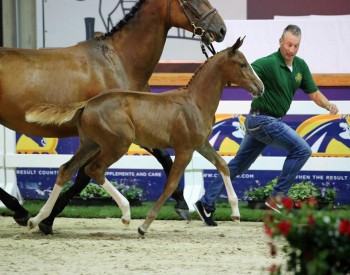