Buyers from all over the world made a good deal at Jumping Bonheiden last night in the Flanders Foal Auction. Most of them did not even attend in person, but made their investments by telephone or online. Orange van de Kalevallei, a son of For Pleasure and the 1.60m Grand Prix mare Sissi van Schuttershof (by Nabab de Reve) was the most expensive foal by far. Olympic showjumping rider Peter Charles claimed him by telephone for an amount of 42,000 euro, after he had also purchased Cervo STS Z (by Conthargos) out of the 1.60m Grand Prix mare Avanti for 18,000 euro.

In total 28 of the 30 foals changed hands, the turnover in just a little more than two hours was 431,000 euro with an average price of 15.446 euro. And so Flanders Foal Auction maintained its customary high level. “That was not absolutely expected. Although we had a lot of confidence in our collection, you should realise that foals offered for sale are legion and there are quite a lot of foal auctions these days”, says Gerald Lenaerts.

Client circle
Luk Van Puymbroeck had his hands full with the telephone traffic. “By staging auctions from time to time, you notice that certain clients keep returning. Our client circle is steadily growing, people have confidence and the foals are good.” Ten foals were sold for 18,000euro and more. For example, 28,000 euro was paid for the extremely handsome Camille van Twelve Oaks (by Comme il Faut) by a buyer from Great Britain.

The figures speak for themselves. Only six (!) foals stayed in Belgium, the other 22 are going abroad. Remarkably, three foals were sold by telephone to the Emirates, where the FFA team has already organised three embryo auctions. “We met the people over there. This only confirms our feeling that we should continue staging auctions there on the spot”. The foals in question were Toucon CC Z (by Toulon), Highlight van ’t Vossenhof Z (by Hickstead) and Our Beauty SI (by Colman). Auctioneer Dirk Zagers knocked down Cadilac Z (by Cabrio van de Heffinck) for Qatar. Corneel Tachor Z, a son of Carthago Z out of the full sister of top mare Valentina van ’t Heike, went for 19,000 euro and will go to the USA with three other foals.

Beervelde and Dublin
The focus is now on the new foal auction to be held during Flanders Horse Event in Beervelde on 3 August and the new embryo auction in Dublin on 9 August. “The collection for Beervelde is really very good”, promises an enthusiastic Luk Van Puymbroeck.

“For the embryo auction in Dublin we still have room for some really exclusive embryo’s. The auction takes place on the Friday night during the CHIO in the Intercontinental Hotel, the most luxury hotel in Dublin. It is a new challenge, but I believe that we can give Irish breeding a boost. The finals for the young showjumping horses at CHIO Dublin are extremely popular, but nowadays those youngster must have been born in Ireland to qualify. Who knows, maybe out embryo’s will be jumping there some time in the future”, says Gerald Lenaerts. 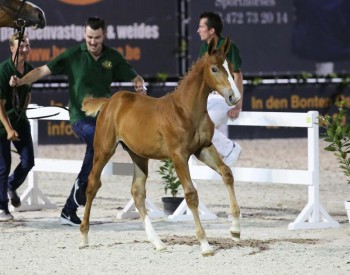 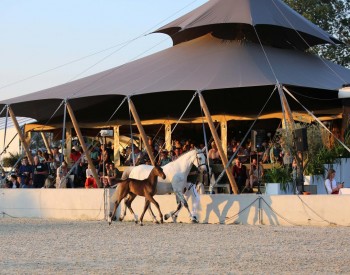