Big names from the equestrian world went to the Flanders Foal Auction at the Sentower Park Thursday night to invest in a jumping foal from the best bloodlines of Europe. With 49,000 euro as top prize for the magnificent, very light footed galloping Quelle Dame Schuttershof (Cornet Obolensky) and an average price of 16.453 euros, the foal auction in Opglabbeek was exceptionally successful.

The selection committee consisting of Luk Van Puymbroeck, Koen Terryn and Gerald Lenaerts gathered a high-quality collection of foals and two embryos. There was satisfaction after sales despite the auctions slow start and the three foals that were not awarded by the breeders.

To organise the Flanders Foal Auction in the same weekend as the FEI World Championship Young Show Jumpers at domain Zangersheide proved to be a strong move, because most of the buying public came straight back from Lanaken to the beautiful VIP terrace. Many foals have been sold to top stables and will have every opportunity to realize the expectations of their exceptional pedigrees in the future.

Prior to the auction Quelle Dame Schuttershof was very popular. As a result the quality filly by top sire Cornet Obolensky x Dobel's Cento out of the half-sister of Kashmir Van Schuttershof went for 49,000 euros to the Muney Sunk Stables, USA.

With 25,000 euros each the two embryo’s by Apardi x Quintero and a full sibling of Aachen winner LB Convall (v. Colman) were also popular. 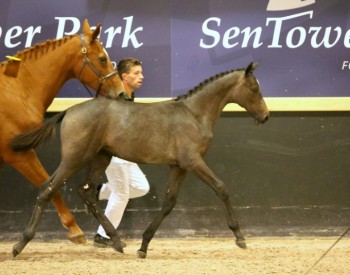