Flanders Foal Auction back again in the Emirates

The new year has barely begun or Flanders Foal Auction has already sold its first unborn showjumping foal. Last Saturday top-class rider Peter Charles bought two of the six offered at Horse Auction Belgium for 24,000 and 13,000 euro, the average sales price being 16,000 euro. All eyes are now on the Flanders Embryo Auction in Sharjah, near Dubai, on Friday 25 January.

For the third year in succession, the FFA team descends on the magnificent accommodation of the Sharjah Equestrian & Racing Club, where from 24 to 26 January an international CSI3* showjumping event is held with, for the first time, nations cups for youth riders. One week later the poles will go up again in the CSI5* weekend, for which the celebrated Dutch course-builder Louis Konickx was contracted.

Forerunner
The Sharjah Equestrian & Racing Club (SERC) is a forerunner in the Emirates in the equestrian sport and often tries out new activities, such as now the first (and so far only) embryo auction in 2017. Sultan Mohammed Khalifa Al Yahya’ie, who is the man in charge of the equestrian centre, already bought several embryo’s at former editions and came over in person to the studfarm ofLuk Van Puymbroek in Drongen, Belgium, where the young showjumping horses are reared.

The new collection consists of twenty embryo’s, each and everyone of them with impressive pedigrees. Gerald Lenaerts, together with Luk Van Puymbroek the driving force behind the successful Flanders Foal Auction, is very pleased with the diversity in the catalogue.

Unique pedigrees
“We try to offer something new every year. We want to offer horses that are not normally found on the market. A Don VHP out of a daughter of the top-class mare Pialotta, for example, a full brother or sister of Beezie Madden’s Nations Cup horse Darry Lou, or an Eldorado whose full sister Jeunesse had just one time fault in the first round of the Aachen Grand Prix under Yves Vanderhasselt. Jeunesse was one of the best oncoming horses in Belgium last year. By Verdi, KWPN Horse of the Year, we have an embryo out of the dam of Grand Prix jumper Baileys ridden by Michel Hendrix. Now those are interesting items, don’t you think?”, says Gerald Lenaerts.

Realistic prices
The offer comes more easily every year, the Belgian men have noticed. The breeders have found their way to Flanders Foal Auction. “We mainly sell foals and embryo’s from Belgian bloodlines, but we certainly do not limit ourselves to one country or one studbook. We even have offers from Germany, France, Italy, Ireland and Great Britain. There is not a single embryo in this collection that does not bring a smile to your face. Another fine aspect is that the breeders ask very realistic prices. We like to sell and not be hampered by prices that are too high. There are plenty of (online) auctions offering magnificently bred embryo’s, which are not sold in the end because the breeders ask too much. Our embryo’s can in principle all go for a fair price.”

Growing interest
The expectations for the aucton on Friday-night at 18.30 hours (local time) are high. “I have a good feeling about it”, says Lenaerts. “More interest has been shown from Europe than ever before. They want to bid online or by telephone. In Sharjah itself there will also be sufficient bidding. The Arabs have come to know the auction by now. We have established direct contact with the Sultan and everything is getting easier, now that confidence has grown. He was pleased with the way the foals were looking at Luk’s place. When they are a little older, we will do some free jumping with them.”

Auction outdoors
This time the embryo auction is not held in the indoor ring but outside, just before the start of the spectacular Six Bar class. “We are very happy about that. People do not like to leave their seats and we got little public indoors, but we now expect that it will be a well-attended evening. The auction will take about one and a half hours.”

After their purchase, new owners can immediately take out an insurance, so that the full amount will be paid out if the foal is not viable. “This has so far happened twice and was promptly handled to full satisfaction by Catherine de Buyl Horse Insurance.”

Coming to the client
Flanders Foal Auction has more on its agenda this year. In March the team will for the second time visit Ocala (USA) for an embryo auction and will again make its appearance with foals in Bolesworth (GBR), Bonheiden (BEL) and Opglabbeek (BEL). “By coming to the clients, we make the difference with all the other auctions. Before you know, you find that you are all fishing in the same pond and the pond is not very big. One thing is for sure, Arabs will never buy an embryo online. You can only sell, when you visit them and we are quite happy to do so.” 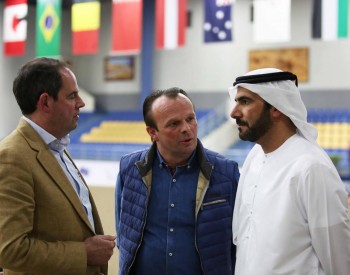