The trend of foals going for less money at foal auctions than in previous years has so far passed by Flanders Foal Auction. So, what is up? Gerald Lenaerts from Flanders Foal Auction foresees that normal foals will even go cheaper next year, the special one becoming more expensive. He is currently focussed on the next auction on Thursday 19 September, which he organizes, together with Luk Van Puymbroeck, at Sentower Park in Opglabbeek. After Sharjah (UAE), Bonheiden (BEL), Beervelde (BEL) and Dublin (IRL) this will already be the fifth auction this year, very close to the World Championships young showjumping horses at Domain Zangersheide.

'Better start with a good one'
The foal collection for Opglabbeek is available online and can again be called impressive. The pedigrees are drenched with top-sport genes, the models of the 39 strictly selected foals make your mouth water. “That is what it is all about, nowadays. You better start with a real good one than with a dubious one. It is all getting more professional. The costs of rearing and training are high, often higher than the purchase price. I noticed that people are quite willing to make investments, but they want to have more security. The foals have to come from very special lineages. The others are sold for far lesser amounts because the chances that they will turn out to be very special are a lot less. This forms a problem for many auctions. They are doing a great job, but the market has changed rapidly”, analyses Gerald Lenaerts.

Chacco Blue
Flanders Foal Auction has been focusing for many years on foals and embryo’s bred for the top sport. “The offer is so broad that we can become more and more critical. Thanks to ICSI one more often breeds with the better kind of mares. That is how in Opglabbeek we can offer a Chacco Blue x Vigo d’Arsouilles out of a daughter of the 1.60m Grand Prix mare Tabelle van Sombeke. Same dam has also produced offspring that we auctioned in Beervelde and in Dublin”, says Lenaerts.

The Chacco Blue was born in Italy, as did Clara Z (Clarimo x Malito de Reve), grand-daughter of Harrie Smolder’s former top-class mare Walnut de Muze. Two of the foals even come from Poland. “Poland is becoming a horse-breeding country. These people want to get ahead, they have good insight. We will hear a lot from them in the future!” One, a real eyecatcher, is Notting Hill (Cornet Obolensky x Romualda), half-brother to MJT Nevados, the recent winner of team gold in the European Championships in Rotterdam under Gregory Wathelet. The other foal from Poland, Miss Cardenta (Cornet Obolensky x Levisto Z) out of the line of Cardento, is a full sister of last year’s auction topper (34,000 euro) at Sentower Park.

Another interesting one is the magnificent Capetown VDB Z (Balou du Reventon x Quidam de Revel), whose sire can be called the revelation of the season. Conthargos, one of the great progenitors of the future, supplied two foals. If you rather start a mares line with Heartbreaker, his daughter Howla Paula TK Z out of the 1.50m level showjumping mare Costa Rica will be a good foundation. In short, the offer again looks excellent.

Auction day
The foal presentation is on Thursday 19 September at 18.00 hours, the auction will start at 20.00 hours. Clipmyhorse.tv provides for the live-streaming. Also this time around, it will be possible to join the bidding online or by telephone. 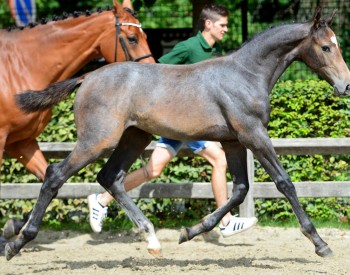