The Flanders Embryo Auction on Friday-night 9 October in Arneberg Equestrian Center, Norway, the last of the year, was one to be not easily forgotten. Plagued by internet problems that caused stagnation in the online bidding and the loss of livestreaming, but supported by a powerful Norwegian buyers peloton and clients that simply grabbed the telephone, the average price reached 22,000 euro.

The interest in the jumping foals to be born in 2021 was enormous. Nations Cup rider and dealer Geir Gulliksen gave the auction a great boost on the spot by advising his sponsor to claim number 1, the Chacco Blue out of the half-sister to Ben Maher’s Explosion, for an amount of 26,000 euro. A little later they also purchased the predicted auction highlight, the Chacco Blue out of the full sister of Emerald, for 42,000 euro.

Lifeline
“The auction set off at a good pace until the internet connection suddenly died at number six. We were immediately buried by messages and phonecalls from people who had been following the proceedings online and that makes you realise once more that you can no longer do without the internet. It is the lifeline of our auction concept: live auction, online bidding. The internet problem was a little stubborn, but after a break the auction continued. In spite of all this, the prices were really good. The people here and at home remained enthusiastic and interested”, was the experience of Luk Van Puymbroeck and Gerald Lenaerts.

Emirates & United Kingdom
A client from the Emirates even bought four embryo’s online: the For Pleasure x 1.60m Grand Prix mare Ciske van Overis (28,000 euro), the Emerald x half sister Catch me if you can (22,000 euro), the Kannan x dam of H&M All-in (22,000 euro) and the Conthargos x half-sister of 1.60m level horse Zypern III (15,000 euro). A British buyer got two, one of them the Chacco Blue x half-sister to the 1.60m Grand Prix horse Coldplay for 32,000 euro. And for 24,000 euro the Emerald out of the 1.60m Grand Prix mare Teavanta III C Z will go to Russia. There were also buyers from the Netherlands and Switzerland. 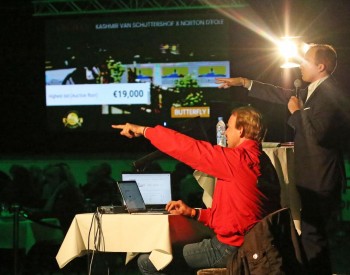