This week the team from Flanders Foal Auction will descending Dublin for a second time. On Friday-night 23 embryos will go under the hammer and a visit is paid to the illustrious Dublin Horse Show. It has taken a while before the event could return because Covid-19 thwarted its continuation, but after three years the show has come alive again and so Flanders Embryo Auction will again settle down in the nearby, luxurious InterContinental hotel.

The first edition had been unforgettable. Ireland is a horse country where showjumping and breeding are very popular, which showed in the number of visitors and the enthusiasm on that night. Half of the number of embryos ended up in Irish hands and one of them is now a licensed stallion, owned by Andrew Hughes. For the Irish, the advantage of buying an embryo is that it will be born and registered in Ireland and therefore can start in the national championships for young horses.

‘Extremely interesting’
Gerald Lenaerts and Luk Van Puymbroeck are looking forward to the reactions about their current collection. “It is extremely interesting. You can hardly find such foals anywhere. When an Irishman buys an embryo, we handle the transport of the recipient mare to Ireland. Besides, we have found a new insurance company that offers a whole year’s coverage at 11% of the purchase price. That is already considerably lower than former insurance companies did.”

To pick out a favorite on paper is not that simple, but if they had to choose? “Then we would go for the Chacco Blue out of Gancia de Muze, a phenomenal mare. She won so many 5* Grand Prix’s with Niels Bruynseels. We are honored to be the first to be allowed to auction her offspring.”

In total, there are five Chacco Blue’s. Bred out of the Olympic mare Sancha LS ridden by Daniel Bluman, for example. Or one out of Calgot Pleasure (1.55m GP), daughter of Liscalgot on which Dermott Lennon won the 2002 World Equestrian Games. The collection also includes a three-quarter brother or sister to Olympic champion Explosion W ridden by Ben Maher.

Then there are four products by Emerald, such as the one out of the 1.50m Grand Prix mare Carrera De Muze (Darco), daughter of Exquis Walnut de Muze (1.60m GP). This damline has already produced thirteen 1.60m Grand Prix showjumping horses. Out of half-sisters of Levis de Muze (1.60m GP under Loli Mytilineou) we have an Emerald and a Cartello VDL. The two Heartbreakers are also very interesting. The Heartbreaker x Diamant de Semilly is a grandchild of the 1.60m GP mare Townhead Imagine de Muze, the Heartbreaker x Fetiche du Pas has the top-class Grand Prix stallion Halifax van het Kluizebos as a full brother. Just scroll down the list. We are ready to answer any questions.

The Flanders Embryo Auction in Dublin will start on Friday 19 August at 19.00h local time (GMT+1). Bids can be placed live, by telephone or online. 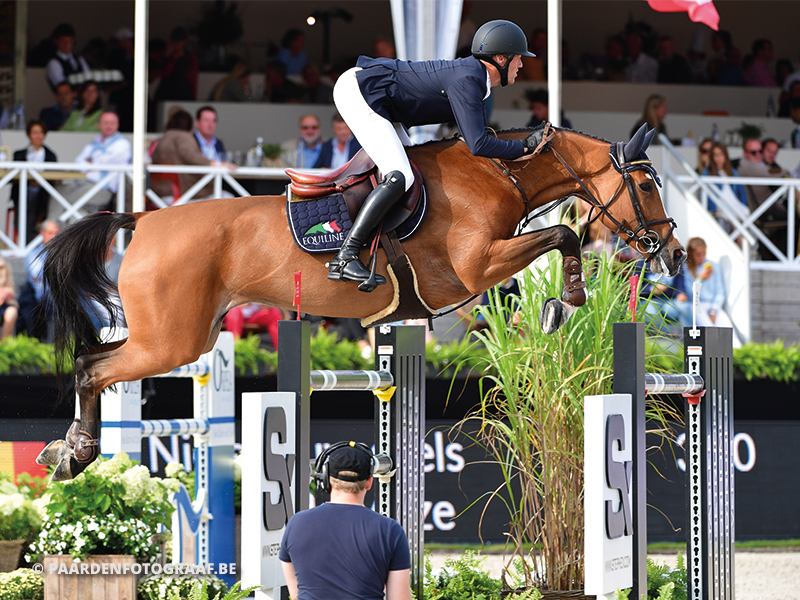 We have an embryo by Chacco Blue out of the famous Gancia de Muze, ridden by Niels Bruynseels