The third edition of the Flanders Embryo Auction in the Arab Emirates surpassed the previous two - also successful - auctions in all respects. Nineteen of the 21 unborn foals out of excellent mares lines were sold for 369,000 euro and the average price went up to more than 19,400 euro. Truly unique was the bidding on the spot for the embryo’s by Chacco Blue and Baloubet du Rouet, which were both knocked down for 44,000 euro.

After two relaxed indoor auctions at the magnificent Sharjah Equestrian & Racing Club, the Friday-night auction on 25 January was held outdoors for the first time and the atmosphere was simply loaded  because of the large Arab public attending. The mission of selling more embryo’s on the spot proved a success with 12 sales. An additional three were sold via the online bidding system and four by telephone.

Al Shiraa Stables
The 18,000 euro bid for number one, Comme il Faut x Kannan x Guidam, grandson of the 1.60m Grand Prix mare Pristanna, made a powerful start and a great debute for the Belgian seller Karel Cox, who is starting at Jumping Amsterdam this weekend. The auction had just taken a brief breather when the Al Shiraa Stables struck, buying two embryo’s, including the Cornet Obolensky x Oklund out of Michael Whitaker’s 1.60m Grand Prix mare Wildrose for 20,000 euro.

Twice 44,000
Junior rider Claudia Imperiale and her father had already bought several embryo’s via their Portuguese competition rider Joa Marquilhas but now came in person to catch four. At 44,000 euro they signalled the winning bid to auctioneer Dirk Zagers for the Baloubet du Rouet x Cornet Obolensky out of the Roosakker damline, to the mild disappointment of Sultan Mohammed Khalifa al Yahya’ie, the man in charge of the club. He bought four, anyway, just like he did in the past two years, including the Chacco Blue x Lux for 44,000 euro, bred out of the half-sister to the 1.60m GP stallion Vingino. Also the Emerald x Eros Platiere went to the Sultan for 30,000 euro.

Confidence
Luk Van Puymbroeck and Gerald Lenaerts, the initiators of the embryo auction, are looking back at the event with a very good feeling. “There were real battles for the expensive ones. We had expected them to go for about 25,000 euro, but this was fantastic. Saudi Arabia, Austria and France also claimed a few and one went online to the Emirates. People have gained confidence, you notice that on all fronts”, they remarked.

Confidence is also the key word for the Sultan. “There are several reasons why this auction was even more successful. The people over here have learnt what it is about. In the first year they did not yet know what they bought. An embryo? What is an embryo? I answered many questions and I could show them the born foals on video and the places where they will grow up. I have mine reared at Luk Van Puymbroeck. I made two surprise visits there, with just a phonecall on the day I arrived. They were all in very good condition. I now even have my mares and foals from France brought to them.”

“Another plus is the solid insurance. When a foal turns out not viable, you get your money back very quickly. That also grows confidence. You see that ever more people from over here are joining the bidding. It has just needed a little time. They have begun studying the mares lines and know what they want and do not want to buy. The embryo’s are all well-bred, but about three or four are really special for their pedigree and they sold best. Another few years and my first ones will be under saddle. They receive their basic training in Belgium before they come to Sharjah. Then we will look for a suitable rider, or sell them on or discover that it is a potential Grand Prix horse. The latter we always keep, of course”, he says grinning. 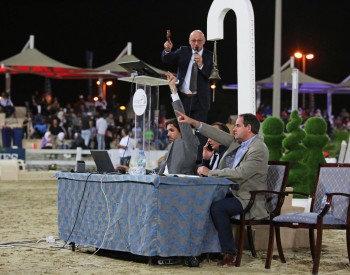