For Flanders Foal Auction the auction year 2020 started with the sale of eight as yet unborn showjumping foals at the annual Horse Auction Belgium in Opglabbeek. Six embryos were sold, of which the offspring of top-class sire Chacco Blue was again the most popular. The average price was 16,333 euro.

René and Conny Viscaal from Stal het Dikkersbos in Albergen, the Netherlands, invested in two embryo’s, including the Chacco Blue out of Soraya de la Pomme (by Shindler de Muze) for 26,000 euro. Soraya, like the 1.60m Grand Prix showjumping stallions Mylord Carthago and Bamako de Muze, comes out of the celebrated Selle Française mare Frangance de Chalus. For 12,000 euro the Viscaal couple bought the Cornet Obolensky x Shindler de Muze out of the half-sister to eight Grand Prix showjumping horses active at 1.45m to 1.60m level, including Tinka’s Hope from Demi van Grunsven.

A regular client from the USA bought, by telephone for 14,000 euro, the Cornet Obolensky x Asca Z out of the half-sister to the 1.60m level Grand Prix showjumping horses Sea Coast Pebbles Z and Aristo Z. The Belgian dealer Stijn Stevens put down 13,000 euro for the Emerald x Aganix du Seigneur out of the line of Ultra-Top van ’t Paradijs and Jeunesse. For 11,000 euro the Bamako de Muze x Marius Claudius out of the half-sister to the KWPN stallion Hotspot also stays in Belgium.

In any case the auction season of Flanders Foal Auction was successfully launched. On Saturday 18 January it will be the first time that the team will put twenty embryos up for auction in Norway. Then follows the fourth edition of the embryo auction in the Emirates on Friday 31 January. For this auction, too, it is possible to bid online.

Click here for the embryo collection in Norway (18 January) 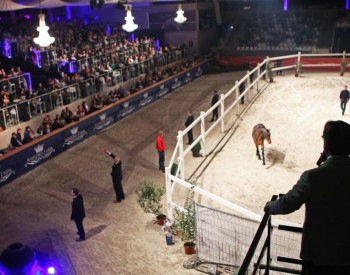