Numerous breeders have offered their best showjumping foals to the organisation of Flanders Foal Auction so that a very strong auction collection was compiled for the auction on Saturday night 22 June during Jumping Bonheiden. The auction will take place in less than 2.5 weeks and is comprised of 30 showjumping foals, each and every one bred from successful dam lines and descending from proven showjumping sires.

“We are again very optimistic about this auction. It seems as if the collection gets better every year. We are offered more and more quality. The breeders have got the hang of it now, they know what will please our national and international clients, but they are now also willing to sell. They are eager to join the auction instead of keeping on their best foals”, explains Gerald Lenaerts, together with Luk Van Puymbroeck organisers of the Flanders Foal Auctions.

The auction at Jumping Bonheiden always has a very pleasant atmosphere. The presentation of the foals will take place in the late afternoon in between two international showjumping classes, the auction itself will start around 20.30 hours. “The auction in Bonheiden has always ran well, but it still promises to be an exciting evening. It is our first foal auction of the season. After that will follow the new auction in Beervelde on 3 August and the auction at Sentower Park in Opglabbeek on 19 September.”

Three countries
The selected showjumping foals were born in Belgium, Germany and the Netherlands. “Via our new Dutch scout Mark Oude Griep we have been able to add several very good foals from Dutch soil to the collection. The Dutch auctions believe that they are best served in Belgium for compiling their collections but the Dutch breeders have not for nothing earned their leading posititon on the world ranking. We have a lot of variation in our collection and have still managed to stick to our strategy. The foals must be offspring from proven sires because this offers a better chance of getting a top-class horse. It has, after all, become clear that a Grand Prix horse will sooner produce a top-class horse than one that has not made or can not make that level.”

Over the years, Flanders Foal Auction has become the starting point for many investors and riders who try to scout young talents at a very early age. Many of the foals auctioned in the past have since grown into promising showjumping horses and a lot of them are rediscovered by third parties in view of the top sport.

The expectations that the foals from the collection of Bonheiden will follow the same route are high. “We have really interesting foals. A Comme il Faut, for example, out of the half-sister to Ulrich Kirchhof’s best horse for many years, Carino. We have a Carthago out of the full sister of Jos Lansink’s Grand Prix mare Valentina van ’t Heike. And three Cornet Obolensky’s, two of them fillies. One is out of a Kashmir Van Schuttershof daughter from the line of Kashmir, the other out of the half-sister to Piergiorgio Bucci’s Grand Prix stallion Casallo. One colt by Conthargos was bred out of the Quattro daughter Avanti 236, which jumped Nations Cups under Tobias Meyer. Then we also have a For Pleasure out of the wellknown 1.60m Grand Prix showjumping mare Sissi van Schuttershof.”

Some of the foals were only a few weeks old on the photo/video day, but they will look a lot more mature at the auction. The foal collection can be found here. Jumping Bonheiden is open for free. Interested buyers who will not attend the auction in person can make their bids online. Registrations can be made here. 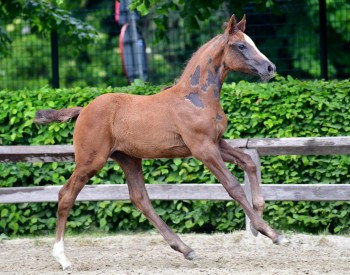