The figures speak for themselves. Belgian show jumpers know what performing is. As a result the BWP has risen tot the first position on the WBFSH ranking for studbooks. Dam lines are loaded with sporting genes and this is exactly what the Flanders Foal Auction is all about. Thursday evening, September 15, thirtysix jumping foals and two embryos with great jumping genes will be auctioned at Sentower Park in Opglabbeek, Belgium.

The Flanders Foal Auction is organized for the fifth year in a row. "We began in 2011 and quickly started organizing two auctions a year, the first in June," says co-organizer Koen Terryn. "Over these years we have grown to an average price of 12,500 euros per foal. This can only be realised by being very selectively. If you try to sell eighty or ninety foals, it is difficult to get that average price. "

All selected foals and embryos come from highly regarded families. "A very nice colt with three generations without performance I wouldn’t dare to buy too expensive. What good is a beautiful woman who can not cook? " He laughs.

Koen Terryn is pleased with the confidence of breeders in the auction. The foals come from the direct dam lines of Big Star, Sapphire, Pialotta, Westside van de Meerputhoeve and Kashmir Van Schuttershof. The collection include a full brother of Dutch show jumping champion Go Easy de Muse, a filly out of the half-sister of Kashmir Van Schuttershof, a colt by Canturano out of the half-sister of Sandro Boy, a filly by Vagabond de la Pomme out of the full sister of Casuality Z and a colt by Kannan out of the full sister of Via Volo van de Molendreef.

A KWPN-touch is ensure by the colt by Cordess out of the full sister of Grand Prix stallion Van Gogh, a half-brother of Carrera VDL and a foal by Tangelo van de Zuuthoeve out of the half-sister of the Grand Prix horse Dejavu.

The foals by Cornet Obolensky will be very popular, but also the offspring of Casall, For Pleasure, Kashmir Van Schuttershof, Kannan, Darco, Vigo d'Arsouille , Quickly de Kreisker, Diamant de Semilly and Emerald will be very interesting foals for investors.

Furthermore Flanders Foal Auction will auction two embryos, among them the future full brother or sister of LB Convall, who won the Aachen Grand Prix with Philipp Weishaupt this year. 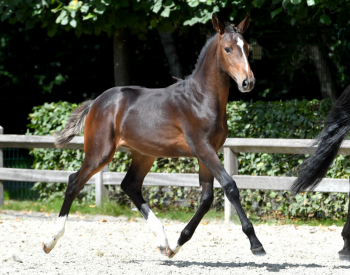